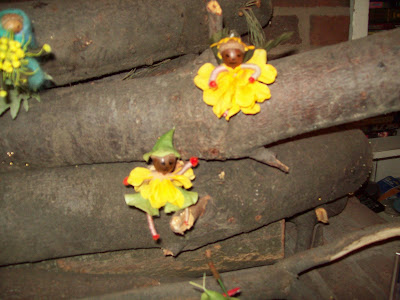 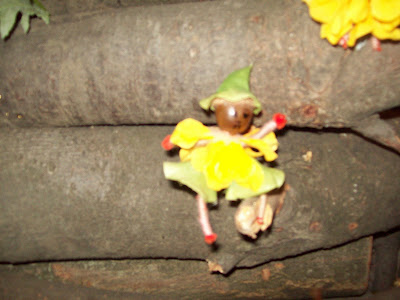 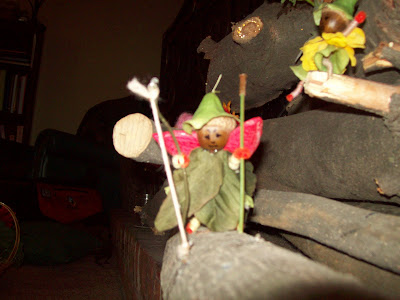 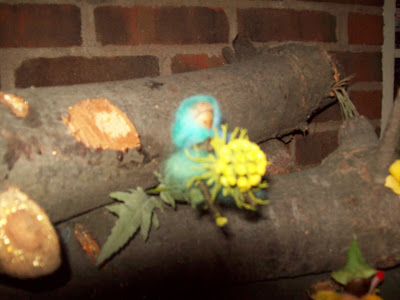 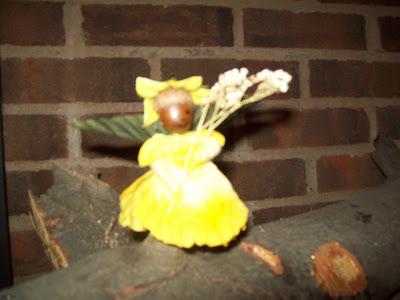 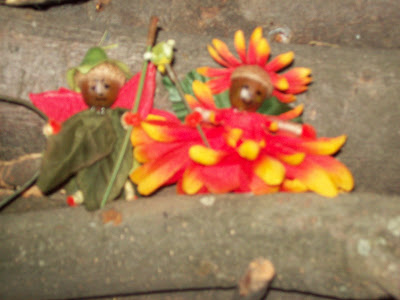 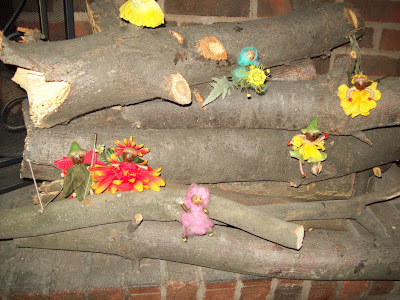 Fata Querca---oak fairies. They seem to have invaded my living room yesterday evening, with a particular attraction to the woodpile. The little ladies from a couple of nights ago were just the advance guard, spying out a good place for their little clan to winter.

As you can see, the scene was a bit hectic, and it was difficult to get these creatures to stand still for a portrait, so I had to settle for several somewhat blurry candid shots. The little soldier fairy was particularly keen on marching back and forth. Each time I tried to approach the queen, he menacingly waved his wee little stick in my direction, and shook his bow, shouting and ululating like I imagine an ancient warrior might have done. Finally the queen ordered him to stop, so that we could have a conversation.

My main inquiry as to what they were doing in my woodpile and how long they would stay was simply greeted with tiny peels of laughter, as if I had told a very funny joke. After the queen had calmed down (faeries live like bees, with a queen, and worker fairies, although what their role in the eco-system is remains unclear) we were able to talk a bit, but with difficulty. I learned that each group is called a "band". The queen of this particular band seems to have ADD. But perhaps that's just the nature of the Fata Querca. As I've only recently been forced to start learning about faeries, my information is still limited and my experience with them shallow.

I did gather that they like woods, wood and wooden things. And they like people who like the woods, which is why they decided to visit my wood pile. Perhaps they shall stay awhile. In the pictures above, the queen is the one in the flame colored flower dress.

Amber said…
I'm impressed at the quality of the pictures! For such elusive creatures, you've done remarkably well in capturing them! :)
8:15 AM

We had similar Acorn people visit our home each year as children, but, they were, ahem, our nativity scene. :) (What can I say, my mom worked with what she had, which happened to be acorns, pipecleaners and felt. LOL) :)

I don't understand a word, but this makes me happy. OK, I'll admit it. I like clothes. Most of what I get is from the thrift store, but that's OK. I still like to look nice. And appropriate. And modest. My biggest picky-point is that if one googles something like "modest Christian Women's clothing", one often comes up with stuff that looks like it's trying to recapture "Little House on the Prairie". So, I was thilled to see this: Recently a fashion show for Orthodox Women's Clothing was held at the Kremlin Palace. According to the article, which I read translated on Babel Fish, this fashion show was very well received. I am so very amused because this is SO how the women in my parish dress. In America. In a mission parish. Never having been to Russia. (Except most of us are a bit fatter and less pretty than these Russian Supermodels...but still). I find it interesting, that without a specifically stated code of "how to dress modestly" most tend to gravitate towar

Eleventy billion years ago, when it was newish, I met up with a friend for coffee, and she told me about this new cool thing called facebook.  I fell down that rabbit hole, and it was the death of my blogging.   I tried over the years to go back to the blog writing, but it was always lacking the energy that it posessed before social media landed in my lap.    So I am trying to push myself in two new old directions: I want to start reading again (I was going blind and had eye surgeries and my eyes get very tired very quickly when I read paper pages, but my kindle is readable), and I want to start writing again.  Nobody please tell me to "write a book".  Gosh, that will probably never happen and if it does, it won't be because someone told me that I should.  I am stubborn like that.    So if anyone finds this, who used to read this blog a long time ago, an update: My kids are grown but not flown, my husband died of cancer in 2017 and I work part time at a library NOT as a l